Recently I ran an ad on Facebook and tracked the click throughs on negotiation topics by gender – an easy variable to track through Facebook. Since Facebook users are 43% female and 57% male, I expected click through demographics to be roughly the same. Instead, 17% were female and 82% were male.

What does this mean, if anything? Do more males look to negotiation as a skill they need? Are females not interested in negotiation? Do they  simply try to avoid it? Do more men just click on more Facebook ads whatever the content?

As a follow up, while conducting a keynote workshop for women professionals, I asked the audience this question: what’s your approach to negotiation?

(ii) I avoid the situation

(iii) I prepare for conflict, or

(iv) I happily enter the transaction.

In a “show of hands” (admittedly not the most precise of research methods), most raised their hands to “avoiding the situation.”

Whatever your gender, what’s your answer? Do you avoid negotiation and conflict at all costs? Carefully prepare for the interaction? Enthusiastically jump in?

What would happen if you shifted your perspective and saw negotiation as an opportunity to improve not only your career, but also yourself and your personal relationships? While my data are far from peer reviewed, actual research is clear that negotiation is the means we use to get our needs met. Let’s examine some strategies for how to make outsized prospects of negotiation human sized and approachable.

When my webinar attendees were able to free-write responses to the question of what they most hated about negotiation, ego came up more than any other factor. I speculate they meant the self-importance of others at the negotiation table, rather than themselves; most simply wrote “egos” with no explanation, while one wrote “dealing with egos.”

Ego is dangerous in a negotiation, primarily for the person who can’t set it aside. Ego makes people talk — a lot. The more you say, the more you lower your hand and reveal your mental state. 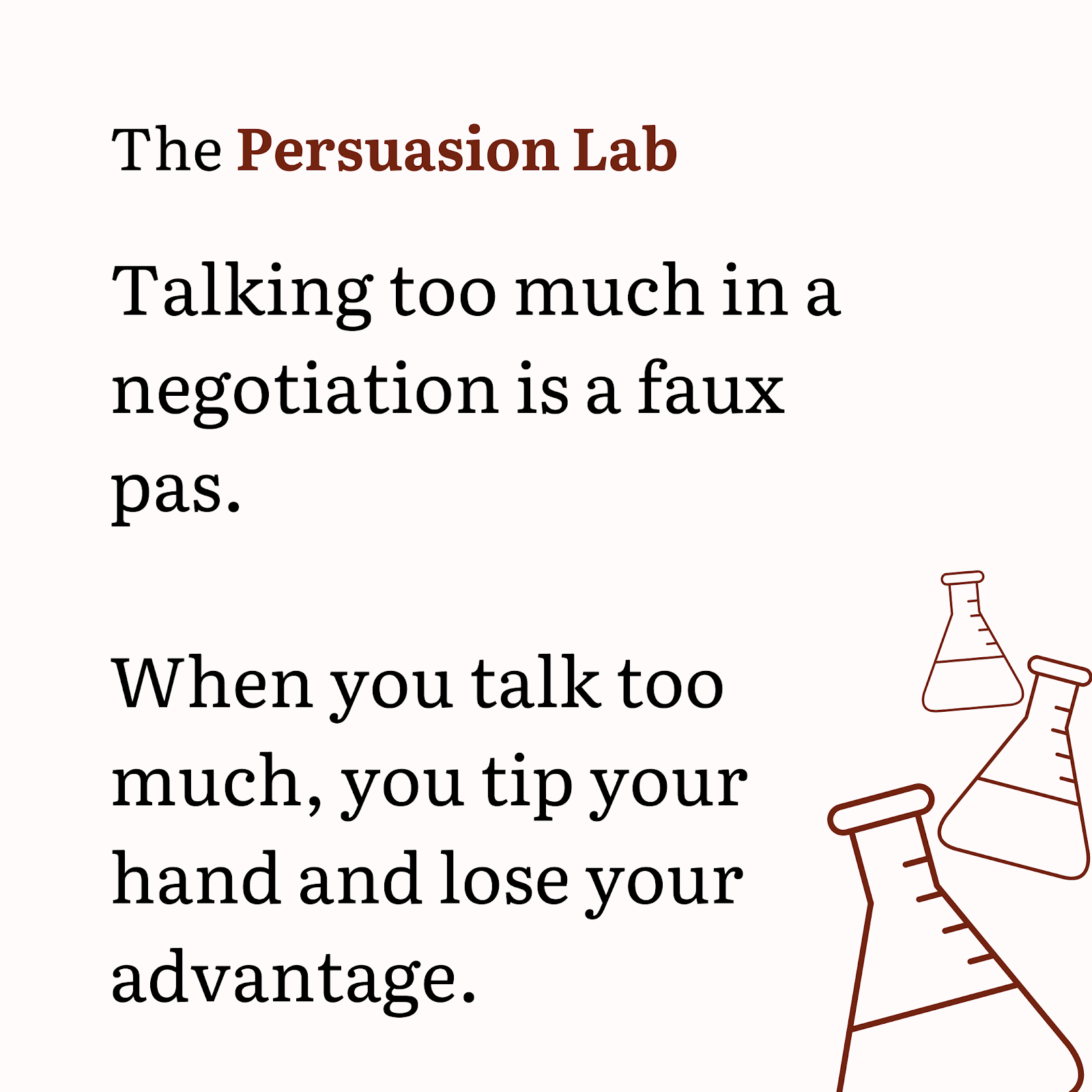 If you’re the one with the talking problem, it is critical to get a handle on how to sit in silence. Especially in an adversarial proceeding, it’s best to not reveal your mind state until certain critical points in the negotiation.  Less is more.

Meanwhile, if you’re the one sitting across from a chatty Kathy (or Charles, as the case may be) pay attention. The more information you glean, the more you can use to your advantage.

Another exceedingly common concern is lack of knowledge. This showed up in several ways. Not knowing

Of course a lack of knowledge is no excuse in the information age. My book, these books, and the Persuasion Lab Podcast are all excellent places to start for the basic negotiation strategies and tools to implement them.

If your concern is more not knowing your own position clearly, take some time to get clear! Practice your words until they’re rote. Knowing your own intentions, even without knowing the other party’s ultimate goals, keeps you on track to get your own needs met — or walk away if you can’t.

Finally, the only way to get experience is to … get experience! The more negotiations you prepare for and complete, the more familiar you’ll be with the tactics and the better you’ll get.

3. You Think You Have to Be Someone Else

Women often try to be other than they are, especially in negotiation settings. One said “I don’t know how to do this; I’m not a haggler, I’m an engineer.” Another woman said, “I dislike dealing with selfish ‘taker types’ because I feel like I need to change how I naturally behave to protect myself from being taken advantage of.” Some other ways this shows up is in feelings of insecurity, inauthenticity, forced aggression, or simple awkwardness.

Be yourself by following a process like any other professional. Think about other professionals: do surgeons who just came off the tennis court have to tap into some different personna to go into work like a Hollywood archetype of learned surgeon? No, they are trained in procedures at medical school, they show up and do the process. Do aircraft pilots, who just came from a birthday party for their two year old grim-up by playing Danger Zone by Kenny Loggins when they get to the cockpit? No – they go to the pre-flight checklist.

Negotiators are no different. 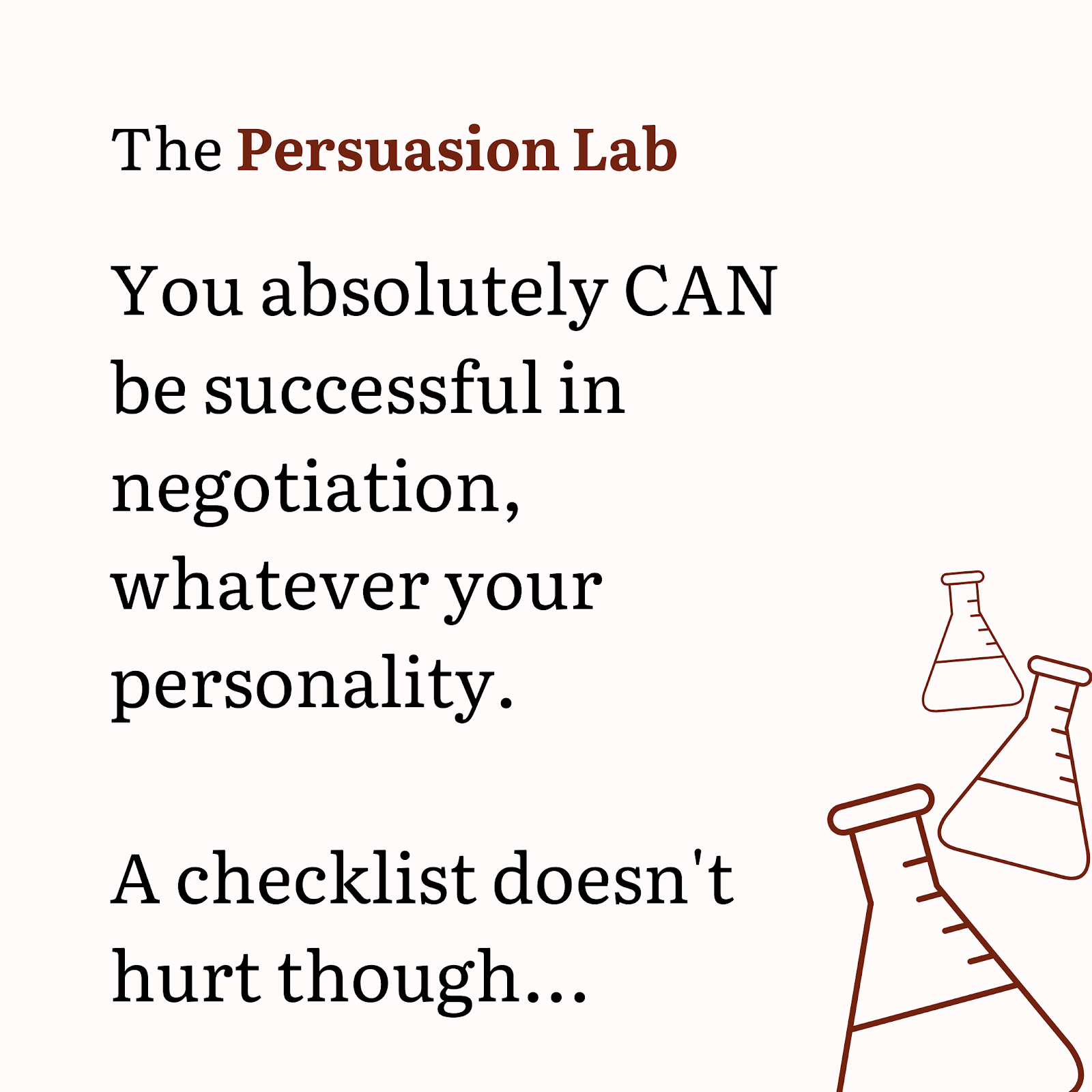 What is your “pre-flight negotiation checklist?” What works for you? How do you deal with contingencies like belligerent people? Knowing or thinking through these scenarios ahead of time can help.

4. Don’t Know Who Has the Authority

Professional negotiators rank this as a top ten most important negotiation saving tactic. Before you start, ensure you know who the decision makers are – nothing wastes more time and money than thinking you’re dealing with a decision maker… but they are actually a gatekeeper.

So ask. Ask who is legally authorized to bind the company. Put a warranty in the deal that the undersigned has authority and put the name of the person represented on that contract. This will ensure early correction if you have listed the wrong party initially.

Fear here comes from anxiety about being too aggressive or adversarial in what should be a friendly interaction. Boundless negotiations take longer and cost more than well framed negotiation.

When setting boundaries, be clear and unemotional, state simply and concisely the line you are holding.

If you are being asked to do something you are not comfortable with or have not considered, simply say “no”. It doesn’t have to be emotional or aggressive, but saying no, and letting it land without qualification, is powerful. If you aren’t sure about an absolute no, a qualified no may be equally as powerful.

There are many other ways to boundary-set. My go to pro for boundary setting support is Dr. Katherine Hofmann, who frames boundaries as nothing more or less than a container for meaningful interaction. You can listen to a conversation we had about boundary setting here.

Some see negotiation as conflict, the playground of bullies. While negotiations often involve an adversarial relationship, it doesn’t have to be something that triggers anxiety — especially if you’ve taken on the five strategies above.

Another way to deal with fear of conflict is to practice reframing negotiation as a collaboration. You may not have the same specific goals as the other side, but you both are working together to achieve a common agreement..

A certain amount of risk accompanies every negotiation, professional or personal. Your relationships, money, home, promotion… any or all may be on the line at some point. Game it out.

This can be as simple as a thought experiment. It can be as complex as breaking out the calculator for some number crunching — what I call the P4 method: possibilities, positions, probabilities and payoffs. If you know statistics or game theory, map it out. If not, just draw out the what ifs. Either way, you’ll be properly informed.

While you may want to avoid the interaction, often the consequence of avoidance is far worse than an attempt and a perceived failure.

Overall, remember there is no challenge in  negotiation you can’t overcome. Don’t avoid negotiation for fear or anxiety — these concerns need not be a barrier, but signals for attention and practice to improve your skills.

When you ask, persuade, influence, and negotiate more, you get more.